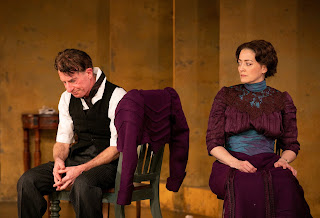 Several of our bloggers saw and enjoyed The Jungle Theater’s regional premiere of the 2017 Tony nominated play A DOLL'S HOUSE PART 2, a sequel to Ibsen's classic.
http://www.jungletheater.org/a-dolls-house-part-2
The Stages of MN: http://bit.ly/2ud1wYn
"This is a play that while not as revolutionary as the original, how could it be, is perhaps a more inclusive examination of gender roles and societies attitudes towards relationships."
Single White Fringe Geek: https://tinyurl.com/u5g4b93
"The scenes between Nora and Torvald are the best material, in a script full of good material, and both Baldwin and Epp just nail it, moment after moment together."
Twin Cities Stages: https://bit.ly/30LhKo1
"The show is at its heart a character piece, and each character is fully fleshed out, no one is the villain, everyone is just living their own life with their own motivations and understanding of the world, all just trying to do the right thing. For me this was so refreshing because it feels more honest to how the world actually is."
Cherry and Spoon: http://bit.ly/cs_dollshouse2
"It feels both of its time and of our time. A Doll's House, Part 2 furthers the conversation that Ibsen began around marriage and women's role in society."
Play off the Page: http://bit.ly/2uCWcha
"The Jungle Theater has assembled an incredible team with four of the finest actors in the Twin Cities. Under the direction of Joanie Schultz, they bring out the complex relationships and emotions of each character. I felt an emotional connection with each of them."
Compendium - Minneapolis: http://bit.ly/31eb2H0
"To be honest, despite my Norwegian heritage and general love of this kind of subject matter, A Doll's House has never been among my favorite plays. Productions of it have always felt a little too staid and precious; most have left me in a snooze. A Doll's House Part 2, however, was just the lightning rod I needed to reconnect with this material."
photo by Lauren B. Photography