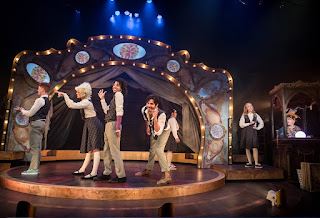 Ride the Cyclone at The Jungle Theater is one of the spookiest things to hit #tctheater this season, and our bloggers universally loved it. Check out their reviews to see why you need to check this perfect Halloween season show out before it closes on October 20.
Play off the Page says "When your 25-year-old son who is preoccupied with starting a new adventure in a far away state walks out of the theater with you and says, “That was worth hanging around for,” you know it’s a good show, well worth your time, and a great way to spend the last few hours with him. Well done, Sarah, and the creative team at The Jungle. You have your finger firmly on the pulse of modern theater and what draws people in." More here: http://bit.ly/2nQp963
Compendium - Minneapolis says "Holy s*** Becca Hart. Pardon the profanity, but I'm just not sure how else to describe one of #tctheater's buzziest ingenues without it. Her performance in the Jungle's season opener Ride the Cyclone - which is a wild ride overall and worth seeing - is a standout that I'm calling early on as one of the best of the year. It's an audacious claim, I know, but I think it's warranted." More here: http://bit.ly/2owtpaW
Cherry and Spoon says "Not only is it one of the most unique musicals I've ever seen, but this production by the Jungle simply couldn't be better. In addition to this stupidly talented cast that plays their roles to perfection, every element of design is spot on and combines to create this warped carnival after-life world. If you're a fan of new and original music-theater, Ride the Cyclone is a must-see." More here: http://bit.ly/2nWvD32
Twin Cities Stages says "The Jungle is consistent at putting on strong ensemble lead shows and Ride the Cyclone no exception. [...] Ride the Cyclone is a feast for all senses, and is a great show for anyone who is a fan of Tim Burton." More here: http://bit.ly/2nRuRVe

Are you looking for something new to explore in #tctheater? Consider checking out some of the new or lesser-known companies in town to see a unique show with great local talent! All of these pieces are closing in early October, so you have a week or so to check them out.
Friends with Guns by Uprising Theatre Company (in partnership with Moms Demand Action for Gun Sense in America), closing October 5
Twin Cities Stages says "Early on in the play I was worried that it was going to be a kind of play that I hate - a play that through conversation between characters essentially lectures to the audience about a certain topic for two hours. But this play, which is currently in its rolling world premiere (it also played The Road Theatre and is soon to open at Chapel Theatre Collective) is so far away from that." More here: http://bit.ly/2mlecJa
Crowns by New Dawn Theatre Company, closing October 6
Cherry and Spoon says "It should be illegal to have this much talent in one cast, but I'm glad it's not because they are a thrill to watch. [...] Each one of these performers can bring the roof down on their own, and their combined power, amplified in the large echoey former sanctuary space, is almost too much to bear. More here: http://bit.ly/2mkCJhm
Gypsy by Lakeshore Players Theatre, closing October 6
Cherry and Spoon says "As someone who lives in the Northeast Metro, it's such a treat to be able to see great theater without having to drive into the city and deal with construction, traffic, crowds, and parking. I'm lucky to be so close to LPT, and since Gypsy is one of my faves (I've seen it six times now) and this cast is so great, it was a lovely Friday evening enjoying theater in the 'burbs." More here: http://bit.ly/2lEFtG3
Ghost Tour by DalekoArts, closing October 12
Cherry and Spoon says "Ghost Tour takes its audience of a dozen people at a time on a walk around historic downtown New Prague. This fun and hilarious spoof of a ghost tour is chock full of local references (prune kolaches for the win!), and maybe one or two true facts of the area, but mostly it's an excuse to get outside, walk around, and experience theater in a non-traditional setting. Which this frequent theater-goer who tires of sitting for endless hours in uncomfortable seats loves." More here: http://bit.ly/2moqgJJ

TCTB Review Roundup: IF THE SPIRIT MOVES at Theatre Elision 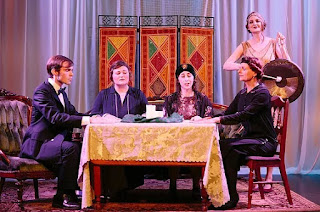 Theatre Elision has an exciting new show called "If The Spirit Moves" in their shiny new performance venue, but jump quick to go see it - it closes this weekend! Check out thoughts from some of our bloggers below:
Twin Cities Stages says "It is a beautiful show that continues in Theatre Elision's tradition of producing new or rarely seen musicals, usually around 90 minutes in length, that center around the stories of women." More here: http://bit.ly/2ml3oL6
Cherry and Spoon says "It's an exciting development for this newish #TCTheater company that has filled a niche we didn't even know we were missing - small-cast one-act new or rarely done musicals, often with a focus on women creators, artists, and stories." More here: http://bit.ly/2lAY7i2

The end of September means the close of several #tctheater shows! Don't lose your last opportunity to see some awesome work this weekend.
Bone Mother by Sandbox Theatre at the The Museum of Russian Art, closing 9/27:
Compendium - Minneapolis says "Bone Mother is a truly unique performance, at once ancient and entirely original; modern but familiar; feminine and powerful. [...] It's the perfect thing to watch as our seasons transition to a darker one and we prepare to sit more quietly inside ourselves." More here: http://bit.ly/2mRaOpj
Cherry and Spoon says "Combine Russian folk tales, aerialists, music, theater, and a unique space and what do you get? Sandbox Theatre's latest uniquely beautiful creation, Bone Mother." More here: http://bit.ly/2lRyUQP
Immaculate Heart by Freshwater Theatre Company at The Crane Theater, closing 9/28:
Cherry and Spoon says "In their new original play Immaculate Heart, Freshwater Theatre thoughtfully explores issues surrounding faith (specifically, Catholicism) and sexuality (specifically, the last and often overlooked letter in the LGBTQIA alphabet - asexuality). Playwright Ruth Virkus has created a world and a situation that feels real and very human, and the three-person cast brings truth, vulnerability, and humanity to their roles. As a recovering Catholic, I'm familiar with the struggle between seeing the good that the church has done and the solace it is for so many people, and the many ways it falls short in the modern world with its intolerant and exclusionary doctrine. This play and its characters embody that struggle very well, as well as shed light on a lesser known aspect of the spectrum of sexuality." More here: http://bit.ly/2lhL19g
Escaped Alone and Here We Go by Frank Theatre at Gremlin Theatre, closing on 9/29:
Cherry and Spoon says: "I don't know if these two plays were meant to be performed together, but they work very well with each other, dealing with similar themes of aging and death. [...] Odd, perplexing, surprising, funny, charming, sad, poignant, and profound are just a few of the adjectives that could be used to describe these plays. " More here: http://bit.ly/2lln2Gf
Our Town at Artistry MN, closing 9/29:
Cherry and Spoon says: "The new production by Artistry, perhaps best known for their musicals, features a fantastic cast that brings out all of the humor, heart, and meaning in this classic. There's a reason that Our Town continues to be produced, and audiences continue to see it - it speaks to us in a very real and deep way." More here: http://bit.ly/2mVyUiH 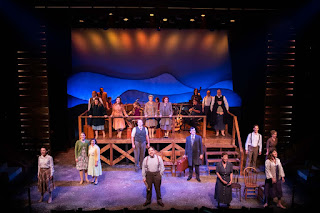 Regional premieres of Broadway musicals are gaining steam in #tctheater, and Lyric Arts is leading the way. Several of our bloggers saw their latest, Bright Star, and had great things to say - check it out before it closes on September 29!
Cherry and Spoon: http://bit.ly/2lZFIvm
"I commend Lyric Arts for taking a risk on a new work and bringing it to #TCTheater audiences for the first time (the Broadway tour did not come to Minnesota). It's a great choice for them and their stage."
Twin Cities Stages: http://bit.ly/2m1RkxX
"Bright Star is a perfect show for anyone who is a fan of folk music, or has been intrigued by the story of the Iron Mountain Baby, of which this story is roughly based upon."
Brett Talk: http://bit.ly/2mmQSdz
"Bright Star is sure to be on many future theatre company's season lists as it becomes more and more popular. Despite having a short stint on Broadway, this alluring musical will live on in regional areas for decades to come. If you haven’t heard the music or seen this show, I encourage you to experience it first at Lyric Arts."

There's only one weekend left to catch Smokey Joe's Cafe at the Ordway Center for the Performing Arts (which has been producing some incredible programming lately, by the way). Read from two of our bloggers why you should go before it closes on September 22!
Cherry and Spoon: http://bit.ly/2m6Yj8z
"While this show may just be song after song after song, it's far from monotonous. The entire space is used well (including the aisles of the theater), and many different combinations and permutations of cast and band are used throughout the night. The Ordway Original Smokey Joe's Cafe is a celebration of beloved mid 20th Century American pop music and a showcase of incredible local talent."
Play off the Page: http://bit.ly/2kL7KKU
"If I played the soundtrack to Smokey Joe’s Cafe, I’d be happy all day long. These are soulful songs that tell a story and reflect on life, sung by performers whose voices raise the rafters and rip into your heart. The rhythms and melodies played in my mind long after the performance, entered into my dreams, and I’m still feeling them today. "

Do you like issues-driven theater that supports local nonprofits? Look no further than The BAND Group. They are currently mounting a production of "Bent," which is about the imprisonment and murder of gay people in Nazi Germany, and are partnering with OutFront Minnesota to bring awareness to modern iterations of this issue. Cherry and Spoon says:
"A look at the daily news should tell you that those days are not as long ago and far away as they may seem, with increasing violence and discrimination against the LGBTQ community. One of OutFront's current campaigns is to end conversion therapy, which is still legal in Minnesota. [...] And you can see The BAND Group's powerful and sobering production of Bent at the Phoenix Theater in Uptown through this weekend only."
Get your tickets to see "Bent" at Phoenix Theater before it closes on 9/15!

Despite our unseasonably cold and wet weather, there are still a few more chances to see some outdoor #tctheater before the snow flies! One such show is "The Clemency of Tito's Tennis Club: A Picnic Operetta" by Mixed Precipitation, which not only provides a show but locally grown and prepared snacks to enjoy while you watch (many of which are vegetarian and vegan friendly). Cherry and Spoon had this to say:

"The food is creative and interesting (prepared by Tracy Yue of One...
See More