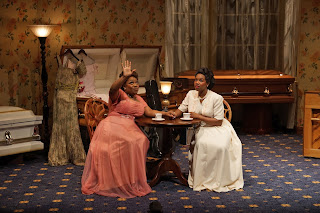 Read what our bloggers thought about Park Square Theatre's regional premiere of MARIE AND ROSETTA, about real life gospel and rock&roll legend Sister Rosetta Tharpe. (Spoiler alert: they loved it!)
Compendium - Minneapolis: https://bit.ly/2AEP9DZ
"The linchpin of the whole thing rests with Jamecia Bennett, who is superb as Sister Rosetta (and may be my favorite performance all year). Bennett has the look, the swag, the dialogue, and especially the pipes - her voice bellows throughout the theater like a sound tsunami, enveloping each and every audience member in a tight, warm, rich embrace. If you're not in tears by her second number or so, I'm not sure you have a soul."
Cherry and Spoon: http://bit.ly/cs_marieros
"This play with music paints a beautiful picture of these two very different women, their music, and their relationship, as well as the hardships both faced in their lives and careers, and brings these two musical legends to vivid life"
Info and tickets:
https://parksquaretheatre.org/box-office/shows/2018-19/marie-and-rosetta/
Photo by Petronella J. Ytsma

TCTB Review Roundup: THE WICKHAMS: CHRISTMAS AT PEMBERLEY at the Jungle Theater 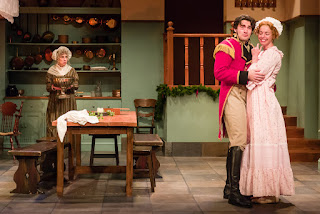 Our bloggers were smitten by The Jungle Theater's second foray into the world of Jane Austen PRIDE AND PREJUDICE fan fiction. Read on for their thoughts on the world premiere play THE WICKHAMS: CHRISTMAS AT PEMBERLEY.
Twin Cities Stages: http://bit.ly/2EaNObh
"THE WICKHAMS is a lovely show for Christmas and for the days we are living in. It is a show about compassion, gender equality and finding your own voice. For those who find joy in theater around the holidays as I do, The Wickhams is a must see."
Compendium - Minneapolis: https://bit.ly/2Q6B9NQ
"The standout elements of this show were the impeccable comedic timing, directed to perfection by Christina Baldwin. This ship is run as tightly as a British naval frigate and the cast whips through jokes with casual ease. That cast is small but smart, by the way, and everyone serves their roles perfectly."
Play off the Page: https://bit.ly/2QgCwd2
"The writers confess that they take a few liberties with the characters and the rules of society of the times, but what they create is entertaining, thought-provoking, and just what we need as we examine the roles and rules of men and women in any society/relationship."
Cherry and Spoon: http://bit.ly/cs_wickhams
"THE WICKHAMS feels like Jane Austen for the #metoo era. George Wickham represents that charming scoundrel who appears so often in novels (and in real life), and turns that idea on its head, revealing that it's actually not charming to deceive and mistreat women, and women both real and fictional are no longer going to put up with that kind of behavior. Hooray!"
Twin Cities Arts Reader:
https://twincitiesarts.com/2018/12/11/review-listening-to-lydia-in-the-wickhams-christmas-at-pemberley-jungle-theater/
Info and tickets:
http://www.jungletheater.com/thewickhams/
Photo credit:
Mrs. Reynolds (Angela Timberman) does not approve of The Wickhams (Nate Cheeseman and Kelsey Didion, photo by Rich Ryan) 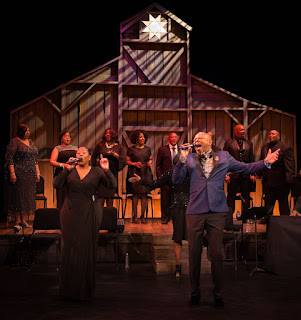 A couple of our bloggers attended this year's production of Penumbra Theatre Company's 30+ year tradition, BLACK NATIVITY - the nativity story as expressed through black culture. Needless to say we were inspired. Read on for more, and click here for info and tickets:
https://penumbratheatre.org/event/black-nativity-3/
Cherry and Spoon:
"There truly is no better place to experience the "joyful noise" of the holiday* season than at Penumbra Theatre's annual production of Black Nativity."
http://bit.ly/cs_bnativity
Minnesota Theater Love:
"No matter how many times I see this show, it always manages to lift my spirits and recharge my holiday spirit. It has that effect on the rest of the audience as well, judging by the clapping and cheering. I heartily recommend it for everyone, whether you are excited for Christmas or a Scrooge in the making."
https://bit.ly/2Qyq8nY
Greta Oglesby and Dennis Spears with the choir from last year's production (photo by Allen Weeks) 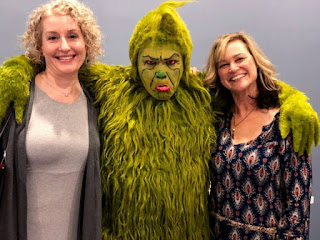 A few of our bloggers recently visited Children's Theatre Company for the holiday favorite HOW THE GRINCH STOLE CHRISTMAS, and some of us even met him! Click the links below to read about it, and look closely for a special 20% discount ticket offer!
Cherry and Spoon: http://bit.ly/cs_grinch18
PhenoMNal Twin Cities: http://bit.ly/2zLbFvc
Compendium - Minneapolis: https://bit.ly/2FqJfMB
Twin Cities Stages: http://bit.ly/2UfeTA0
THE GRINCH continues through January 6, 2019. Click here for more info (including parent guides) and tickets:
https://www.childrenstheatre.org/…/dr-seuss-s-how-the-grinc…
Pictured: Jill from Cherry and Spoon, the Grinch, and Tracy from Soul Photography & Media.

"The entire cast brings such joy and energy to the show that the audience can't help but have fun along with them." ~Cherry and Spoon
History Theatre's Teen Idol: The Bobby Vee Story runs through December 16!