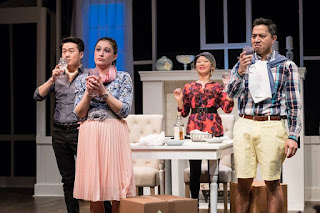 February is a very busy month for #TCTheater and some shows are already closing. The bloggers wish they could go see all the shows, but sometimes only one blogger gets to some really great shows.
In this case the shows are "Make Believe Neighborhood" at In the Heart of the Beast Puppet and Mask Theatre. Of this show Cherry and Spoon said, "Using music, puppetry, quotes, audio recordings, video projections, In the Heart of the Beast has made a piece of theater that truly embodies the life and work of one of the best humans Fred Rogers, as well as the wonderful humans in the Phillips neighborhood." Read the full review here: http://bit.ly/2Fp9eQw
Also closing this weekend is "Picasso at the Lapin Agile" at The Chameleon Theatre Circle. Of this show Play off the Page said, "this production has a wonderful cast. Their characters are distinct, funny, engaging, and entertaining. The dialogue zips right along, and they have a fun and relaxed interaction with each other." Read the full review here: http://bit.ly/2C64Wif

Email ThisBlogThis!Share to TwitterShare to FacebookShare to Pinterest
Labels: Chameleon Theatre Circle, In the Heart of the Beast, Review Roundup 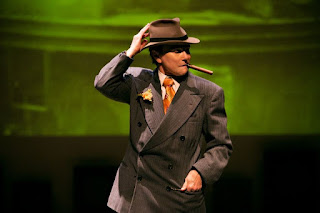 Dancing with Giants is closing this weekend at Illusion Theater. Our bloggers loved the show and its star Tovah Feldshuh. Read more about what our bloggers thought below.
Cherry and Spoon says, "This play is a fascinating exploration of these events and this era in history."
Read the full review here: http://bit.ly/2Fm9u36
Twin Cities Stages says, "To fully understand where we are it helps to know where we come from, and in this case theater has helped to reflect on that past."
Read the full review here: http://bit.ly/2GxLbON

The Resistance of My Skin: TCTB Review Roundup 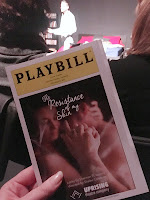 The Resistance of my Skin is a very thoughtful and important play by Uprising Theatre Company currently playing at The Crane Theater. Read more about what our bloggers thought below:
Compendium - Minneapolis says, "The Resistance of My Skin, a lovely new play written by and starring Shannon TL Kearns, reshapes the idea of resistance from one of aggression or anger into one of loving acceptance and empathy. It's a beautiful transition that comes just at the right time and couldn't have a better message to send into the world."
Read the full review here: http://bit.ly/2ENnEMy
Twin Cities Stages says, "The show is short, shown in one act and within it wonderfully navigates many issues around the transgender community and body positivity with such great eloquence." Read the full review here: http://bit.ly/2ES7Yrp 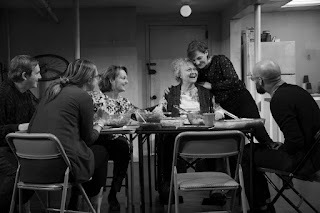 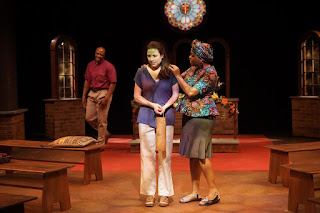 Cardboard Piano at Park Square Theatre is closing this weekend on February 18th. Our bloggers agree that the show is nuanced, heart wrenching and also very well done.
Cherry and Spoon says, "After the play was over, I was so emotionally exhausted I could barely muster the energy to applaud, much less give the cast the standing ovation they deserved."
Read the full review here: http://bit.ly/2nX41b8
Compendium - Minneapolis writes, "This production of Cardboard Piano is nuanced, thoughtful, and has clearly been invested with a lot of intention and care."
Read the full review here: http://bit.ly/2EyOBRG

'Noises Off' Gives New Meaning to the Adage "The Show Must Go On" : A Guest Post from Devyn Terry

Watching a play from the wings instead of the seats, Michael Frayn was amused by the entertainment happening behind the set. So logically, the next step was to write a show about an eccentric eight-person love triangle and recovering alcoholic that are forced to go onstage and act out being alone in a house where ancient tellies and sardines disappear through slamming doors to the equally chaotic backstage where the apparting objects are now bottles of whiskey and flowers being shuffled among love interests. This story morphed into the sitcom-esque show that premiered in London in 1982, making it to Broadway in 1984 where the show won a Drama Desk Award for Outstanding Ensemble. Trying to find seats in Artistry’s Schneider Theater, I noticed that I was the youngest person in the auditorium by like, forty years. Based off of that, I assumed Noises Off was a production aimed at an older crowd. Or, it could just be the Artistry theater company. In an effort to get more young people in their theater, they offer $12 tickets to people 30 and under. Considering the demographic of the audience, I was expecting this play’s humor to go over my head. But lot of the humor was. . . demonstrated (think bodies contorted into oral sex positions trying to fix costumes). As the curtain descended at the end of act one, each character begrudgingly assumed a cheesy pose, creating the equivalent of a promotional picture for a Netflix drama. I could easily see why Noises Off had two successful Broadway revivals - this is a show that knows how to pull off slapstick. Noises Off is a play-within-a-play – each act of Noises Off equals one run of Nothing On, gradually increasing in disaster each time. Act one begins with a caffeine-deficient cast pulling an all-nighter, trudging through their dress rehear– sorry, technical rehearsal – before their show opens in less than twenty hours. This gives some exposition and sets a (hilarious) baseline for the next two acts. During intermission, the set does a one-eighty. Act two is a run of Nothing On from the “backstage” perspective, so the audience can partake in the drama on both sides of the set. By the third and final act, the initial appeal of watching a show crash and burn was starting to fade. Now that I was familiar with two stage environments, I was curious to see what the third act would bring. I was half expecting some unconventional set style, upping the absurdity of it all, but instead the stage had returned to the exact same setup as the first act. Like the set, the rest of the third act was repetitive, give or take a few sardines. Oh, and there goes Brooke, mouthing everyone's lines again. . . and yep, the sardines are still missing . . . The concept of seeing a plot three times under different circumstances is a unique idea (and worth watching all three times), but the quality of first two acts had me expecting some fantastic finish. In order to make the three performances work in its favor, the show needed to intensify exponentially, when instead it opted for a more linear route.That said, if you don't mind a little déjà vu and you're looking for laughs between now and February 18, I would highly recommend a trip to the Bloomington Arts Center to see Noises Off.


This post comes to the Twin Cities Theater Bloggers from Devyn Terry. Devyn Terry is a senior in high school. She does show choir, theater and is in an a capella ground called the Unaccompanied Minors. She hopes to have a theater-filled future as well as continue to learn Spanish and possibly study linguistics in college. 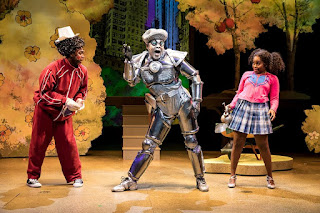 The Twin Cities Theater Bloggers all agree, ease on down the road to see The Wiz at Children's Theatre Company, a coproduction with Penumbra Theatre Company.
Read more about what all of our bloggers thought below:
Play off the Page says, "From the stunning costumes to the tremendous talent and energy of the actors and musicians, this was easily one of the best performances I’ve ever seen."
Read the full review here: http://bit.ly/2BzoEhQ
Cherry and Spoon writes, "...the song and dance numbers are fab-u-lous. And this cast is so chock full of local African American music-theater legends, as well as up-and-comers and a few adorable tykes, that it blows the mind."
Read the full review here: http://bit.ly/2EjZvgs

Compendium - Minneapolis says, "The best part of this Wiz, bar none, is the stellar cast."
Read the full review here: http://bit.ly/2rOx2u7

Talkin Broadway writes, "The Wiz is a wonderful, and wonder-filled, experience for all ages. The music will send you, the story will swell your heart, and the show is, well, wicked good."
Read the full review: http://bit.ly/2E4NAQ6

Twin Cities Stages says, "The Wiz is one of the best tickets in town."
Read the full review: http://bit.ly/2E6ywpq