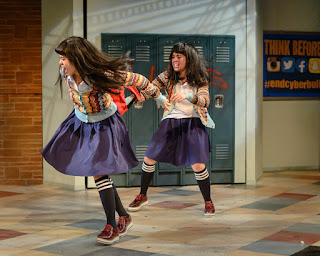 Our bloggers were excited to check out the directorial debut of Theater Mu's new artistic director Lily Tung Crystal in peerless, which made quite an impression. Read more about their thoughts below and check the show out at Gremlin Theatre before it closes on February 16.
The Stages of MN: http://bit.ly/37RS7Ev
"I’m also thrilled to say that the hype I’d heard from friends about Theater Mu were true. Peerless is a thrilling piece of theater, enormously entertaining on the surface with a strong vein of thought provoking commentary just underneath. A solid script that is brought to life by a talented cast."
Cherry and Spoon: http://bit.ly/cs_peerless
"For this regional premiere, Theater Mu has lured back to town a couple of alums, sisters Francesca and Isabella Dawis, to play the twins. Their independent and codependent performances anchor the strong cast that, along with clever design, brings out all of the dark corners of this sharply and smartly written play."
Compendium - Minneapolis: http://bit.ly/2OoJGsu
"If the horror genre is your jam then you will probably find many elements of peerless to like and it seemed much of the audience found this funnier than I did - so why not check it out? peerless was a bold choice for Tung Crystal to open her leadership with, and I'm excited to see what she has next in store."
Twin Cities Stages: https://bit.ly/2Smx6LC
"It may seem odd, to have a comedic take on Macbeth, one of Shakespeare's most well known tragedies, but Park's play does it brilliantly. Keeping the driving theme of ambition, and the relationship between those who stand to gain from the ambitious actions and those who drive them [...] It is a perfect show for anyone who is a fan of Shakespeare's Macbeth, high school comedies, comedic dance breaks or the Gilmore Girls."