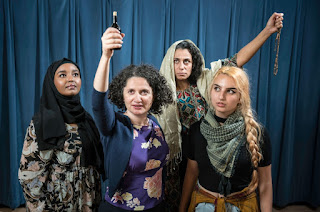 CLOSING THIS WEEKEND: New Arab American Theater Works' ZAHIRA AND THE RESISTANCE at Guthrie Theater's Dowling Studio. Read what our bloggers thought of the show via the links below.
PhenoMNal Twin Cities: http://bit.ly/2JdrsYA
"Zafira and the Resistance is a play about race that can’t seem to decide what it wants to be when it grows up. On its face, Zafira appears to be an attempt at a Margaret Atwood-style dystopian allegory, but it is also a parlor drama about four women from different backgrounds coming together against a common enemy. It is also, somehow, a story about the mystical qualities of olive oil."
The Stages of MN: http://bit.ly/2Mi8z8W
"It may seem small now and in terms of production it is, but the ideas are large and it will open up wide avenues for discussion among attendees. I cannot recommend this enough."