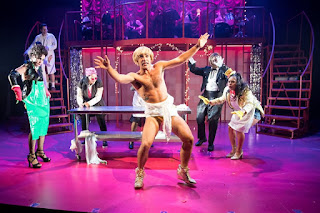 Our bloggers have lots of thoughts about Park Square Theatre's new production of THE ROCKY HORROR PICTURE SHOW. Read on and click the links for more:
Cherry and Spoon: http://bit.ly/cs_rocky
"Camp isn't really my thing, and The Rocky Horror Show is full on camp, so I wasn't as into it as many of the people around me. But there's no denying the talent and commitment of the cast, and the love-bordering-on-obsession people have for this show."
Play off the Page: http://bit.ly/2OsK6yU
"Gracie [Anderson] rocked it as Frank with strong vocals, self-confidence, and bold intensity. In fact, all the vocals were outstanding. I love seeing the band on stage as part of the show. Under the direction of Andrew Fleser, they made it come alive."
The Stages of MN: http://bit.ly/2IMutPk
"The entire cast performs well. Standouts to me vocally were Hope Nordquist and Cameron Reeves as Magenta and Eddie, but it is a uniformly strong cast."
Twin Cities Stages: https://bit.ly/2osJcbd
"I was disappointed that despite the nontraditional casting choice of Frank little went changed. Frank is still a shown as a villain (be it a very fun villain) and an alien... seems to go against the leaps and bounds that we have made as a culture in understanding the nuances of gender identity since the show premiered in 1973."
Photo by Dan Norman.