Big praise for Little Women at the Jungle from Twin Cities Theatre Bloggers! 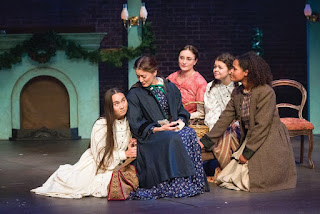 
Have you heard about The Jungle’s world premiere of Kate Hamill’s adaptation of the Louisa May Alcott’s Little Women?  Alcott’s classic, beloved novel about the 4 March sisters growing up in rural New England during the Civil War is enjoying its 150th anniversary this year. Our bloggers were very much in concord about this latest collaboration between Hamill and Jungle Artistic Director Sarah Rasmussen, with plenty of warm admiration for the show and for everyone involved!

Take Mary Aalgaard at #PlayOnthePage. Mary is a “huge fan of Louisa May Alcott” who has “read Little Women at least three times”. Mary praises Hamill for bringing “the spirit of the novel and the March sisters to life in a beautiful and modern way” and  gives high marks to  Director Rasmussen, who takes “this endearing story and gives it new life”  https://playoffthepage.com/2018/09/review-of-little-women-at-the-jungle-theater/

What says Gina Musto at #GinaMusto.Com?  Musto, who read Little Women as a kid, attests that Hamill’s adaptation “has all the charm and elegance of the original story (and all the same plot points and character quirks) with a distinctly modern edge. The language feels contemporary without being utterly 21st century…” https://ginamusto.com/2018/09/17/little-women-jungle-theater/

And Glory Hallelujah did Becki Iverson of #Compendiummpls ever love this show! “This adaptation of Little Women positively teems with life and warmth and joie de vivre, and you are certain to leave the theater feeling better about the world than when you entered.”http://compendiummpls.blogspot.com/2018/09/little-women-packs-big-beautiful-punch.html

“C. Michael Menge is dynamic as Jo,” write the real life sisters over at #MinnesotaTheatreLove, while “as Theodore ‘Laurie’ Laurence, Michael Hanna was everything one could wish for a character who was the object of many young readers' crushes” (!) http://www.mntheaterlove.com/2018/09/little-women-at-jungle-theater.html?m=0

“Each little woman has her complete arc,” notes Jill at #CherryandSpoon. The Jungle/Hamill adaptation “puts more emphasis on the strict gender roles of the time (which are different today, but often still strictly defined), and the way that J, and even Laurie, don’t fit in them. This idea was always there in Alcott’s story but we see it in a new light.”   http://www.cherryandspoon.com/2018/09/little-women-at-jungle-theater.html