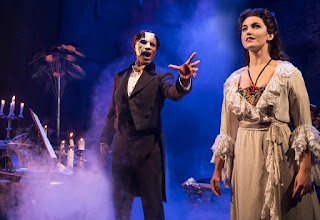 The longest-running and one of the highest-grossing Broadway musicals has come to Minneapolis again. THE PHANTOM OF THE OPERA is playing at Hennepin Theatre Trust's Orpheum Theatre on Hennepin Avenue through the end of the year. Check out what our bloggers thought of this blockbuster musical.
"After decades of success, Phantom shows no signs of slowing down in popularity and appeal."
PhenoMNal Twin Cities: http://bit.ly/2oTusl4
"The current production of The Phantom of the Opera is a joy to see. Thirty years on, not only is it possible to enjoy the music and plot, but this production is proof that the show is able to feel new and exciting."
Twin Cities Stages: http://bit.ly/2BAtC1F
"It was magical and wonderful... The story is haunting and heart-breaking. The voices are extraordinary. And, the set and staging of this production is incredible, with many moving parts and special effects."
Play off the Page: http://bit.ly/2BFOQsU
"First up is the effervescent, flawless performance of the Phantom from Derrick Davis. Davis gives a sinuous, bombastic, nuanced performance that left the audience in chills... He is also the first African American I have seen in this role, a casting choice which lends renewed depth and thought to the Phantom's complicated past (which includes being abused and locked in a cage). I found every aspect of Davis's performance riveting, and he's worth the admission price alone."
Compendium - Minneapolis: http://bit.ly/2CVTTWh
More information can be found and tickets can be purchased here:
https://hennepintheatretrust.org/…/the-phantom-of-the-oper…/
(photo by Matthew Murphy)